Home » Australian Author » Guest Posts » Guest Post: Tina Matthews on the making of So Many Wonderfuls

Guest Post: Tina Matthews on the making of So Many Wonderfuls Kids' Book Review is delighted to welcome children's book author and illustrator Tina Matthews to talk about her latest picture book, So Many Wonderfuls, published by Walker Books in August 2014. We hope you enjoy Tina's explanation of the inspiration for her book and the process of creating the illustrations as much as we do.

So Many Wonderfuls started as a few detailed pencil drawings. Some were made-up places and some were views out my window. At a point I decided to go into close up – so there were pairs of pictures- a wide and a close picture of the same place.

In my mind all the places were in one town but I didn’t have a book in mind, I was just practising drawing so I didn’t forget how. In time I got curious about the town I was inventing and wanted to explore it further. The only way that could happen was for me to draw some more of it. One thing led to another and suddenly there was a whole town full of friends and families and animals and lovely places for people to congregate and I didn’t know where it was but I certainly liked being there.

Round about the same time I read a poem by William Wordsworth, Ode: Intimations of Immortality which included the lines:

Thanks to the human heart by which we live,
Thanks to its tenderness, its joys, its fears,
To me the meanest flower that blows can give
Thoughts that do often lie too deep for tears.

I loved the sound and the sentiment of the words and although I tend to write repetitive text rather than rhyming text I thought I might try to write a poem about the town using Wordsworth’s abab rhyme scheme. In time I did and put it together with some of the drawings into a little knocked together prototype book which I sent off to Walker Books. It got lost on their doorstep for a while but eventually landed on the publisher Sarah Foster’s desk and something about it appealed to her.

I knew the name was So Many Wonderfuls and I knew it was in praise of simple shared lives but I wasn’t certain about much else. Eventually I decided that the text would have no pronouns or possessive pronouns to give the sense that it was everyone’s story rather than a story about anyone in particular.

After talking to Sarah one day I decided to make all the locations public spaces and to have a woman with a hiking stick and a pet pig somewhere on every page. The woman is based on a great friend of my family’s called Gay Saker whose dog Snuffy was a pug, which is how people from New Zealand say ‘pig’. So I made Snuffy a pig. Gay died this year, aged 88, in the month the book was published but she is on every page of the book.

Then I started drawing in earnest, first in pencil then over it in ink. When they were all inked and finished, the pictures were scanned and I put them into Photoshop on my computer. There I could colour them in layers and in stages, rather like printmaking (which is how I did the pictures in my other books). However the extraordinary new thing was that I could try different colours, experiment with how strong or pale I wanted them and clean up and edit parts of the pictures which were covered in pencil marks before I committed myself to the finished result. It’s the first time I’ve made pictures in this way and I loved it. However for Wayne, the long suffering designer at Walker, it was a bit of a nightmare. I am very grateful for his patience!

So Many Wonderfuls is about a small town we all know in our dreams but don’t know how to get to in real life. It’s a place where, straightaway, you feel right at home and I am always pleased when people who read the book say they would like to live there. It’s a place where the public places are valued because they belong to everyone and are not sold off to the highest bidding individual and a place where people look after each other and not just themselves. In truth, I do know a town as wonderful as this but I will never say where it is. I’m sure some of you know though and perhaps you even live there.

I hope you enjoy looking at So Many Wonderfuls and getting to know the people and places and animals and occupations in the town. There are lots of things to look for and other things to think about in these teachers' notes from Walker Books. 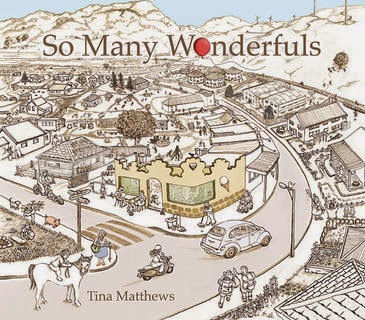 Tina Matthews is an award-winning New Zealand-born author and illustrator who now lives in Sydney, Australia. Her picture books include A Great Cake (KBR review) and Out of the Egg (KBR review). Her latest picture book, So Many Wonderfuls (KBR review), was published by Walker Books in August 2014. Visit Tina's website to find out more about her books and other creative pursuits.
Share this article :
Share on FB Tweet Share on G+ Submit to Digg
Newer Post Older Post Home