Kids' Book Review is delighted to welcome author Pip Harry to chat with us about her latest YA novel, Head of the River.

There are many aspects of Head of the River that take it outside the experience of everyday teens such as Olympian parents, a highly-specialised rowing event, and an elite private school setting. How did you ensure that the story would still resonate with teens who have no connection with these experiences? Do you think the experiences of Cristian and Leni Popescu do have relevance to the lives of modern teenagers?
I was careful to make Leni and Cristian relatable and realistic characters - so readers wouldn’t feel alienated from their experience, even if they’d never rowed a stroke or actively avoided sports! Cris struggles with his weight and comfort eats, Leni finds it difficult to maintain friendships and wonders if she’s dating the right guy. They’re both feeling the strain of year 12 study. These are all fairly common experiences for many young adults.

I’ve been so pleased that the non-sporty readers of the book have said they relate to the twins rowing experiences in other ways – i.e. they also pushed themselves academically or in music, art or socially. Feeling pressure to succeed can come in many forms! Leni and Cris are on sports scholarships so their home life is very down to earth, they both have part time jobs and they don’t have the flash cars, holidays or parties that their friends do. Their parents might be extraordinary human beings as ex Olympians, but they’re also regular parents. They worry about social media, drinking and if their kids are happy.

Head of the River deals with the contentious issue of drug testing of teenagers at school sporting events. Do you want readers to draw a specific conclusion from the way events unfold in the story, or are you aiming to spark a conversation about the issue and highlight consequences of drug use in sporting events for athletes of any age?
I’m not interested in writing YA that preaches, but I’m also aware that HOTR is a cautionary tale! Taking PED’s doesn’t work out well for Cris or his friend Adam. They pay a very high price for thinking they can cheat the system. In general with the book I wanted to spark a conversation about the risks of PED’s and their prevalence in elite sports today.  As I was writing the issue became louder and louder.  Rugby, football and cycling were being heavily investigated by ASADA and many high profile athletes were testing positive.

I also researched several local school incidents where students had been pulled up on steroid use. There does seem to be more kids experimenting with PED’s and other supplements these days. I do worry about our kids looking to sports for role models, and ending up being lumped with the Lance Armstrong’s of this world. People who lie, cheat and risk damage to their bodies (even death) to win. I worry about how sophisticated these PEDs are getting, and how freely available they are. I worry about how much emphasis some private schools place on sporting results at events like Head of the River. And if that tempts young athletes to take the step towards illegally pumping themselves up.  I hope the book’s messages around drugs will speak to athletes of any age, but particularly young people, who are so vulnerable to influence.

You have mentioned elsewhere that your young adult novels I’ll Tell You Mine and Head of the River have elements based on your own personal experiences. How does using your own experiences add to the story?
My own experience adds so much to my writing in terms of making it feel authentic and immediate. I have written books in the past (unpublished!) that I didn’t connect with properly. Now, I try to write to things that I can really, truly relate to. That I’ve been through in some way. In I’ll Tell You Mine, it was my own experience of being placed in a girls boarding school at age 15, for unruly teenager behaviour. In HOTR I used my experiences coaching teen rowers, my own sports background (I swam and rowed at state level) I also had a parent (my dad) who represented Australia in rowing and was a high achiever, so I brought that to the parent characters.

The novel deals with sex and drugs, but there isn’t any mention of the third part of the teen rebellion triad (rock’n’roll). Did you have a soundtrack of songs you played while you worked on the novel?
Music was a big part of writing HOTR. I listened to sports anthems all the time! Songs about winning and losing and being afraid but giving it your all. I imagined Leni was listening to these kinds of songs as she ran along the Yarra River. These were some on my playlist:
- Eminem, Lose Yourself
- Katy Perry, Roar
- The Script, Hall of Fame
- Avicii,Wake Me Up
- Hunters and Collectors, Holy Grail

Head of the River deals with some confronting topics including drug use and sexual relationships. How mindful are you of the potential age of your readers when you are writing about these topics? Does the fact that your book could be read by tweens and young teens influence the way you describe things in the novel, even though Leni and Cristian are in their late teens?
Always mindful! Especially when I’m reminded that even though my characters are 17-18, some of my readers are in the 12-13 age bracket. I think carefully about using strong language. I usually replace original swear words with alternatives. In HOTR I was careful to highlight the negative effects of the performance enhancing drugs that Cris and Adam use, including severe acne, mood swings and agitation and I didn’t include any specific drug names.  I worked carefully with my editors on the sexual mentions, to ensure that they weren’t gratuitous or graphic and that it was true to the character’s development. I also made sure my character Leni thought about and used protection. I want to be responsible if I include sexual scenes in my work.

As an adult writing about teenage characters, how do you ensure that your dialogue and setting remains relevant and authentic for your readers?
I do plenty of eavesdropping! I do need to know if anyone is saying YOLO anymore? What is SnapChat? Is it kiss, pash or snog? I lurk on social media and spend quite a bit of time with teens through school visits, too. I enjoy talking to them, and finding out what their lives are about. As a journalist, I’m observant and I also enjoy trawling through the internet and picking up bits and pieces.

What is next for you?
I’ve got an adult non-fiction relationships book called Get Lucky out this month through digital publisher, Xoum. It’s co-written with a journalist friend called Rachel Smith. I’ve made a start on another YA novel, but I won’t say too much until I’m a bit further in! I want to keep writing for people of all ages, but particularly kids. They are the best audience and the feedback I get from them is incredible. 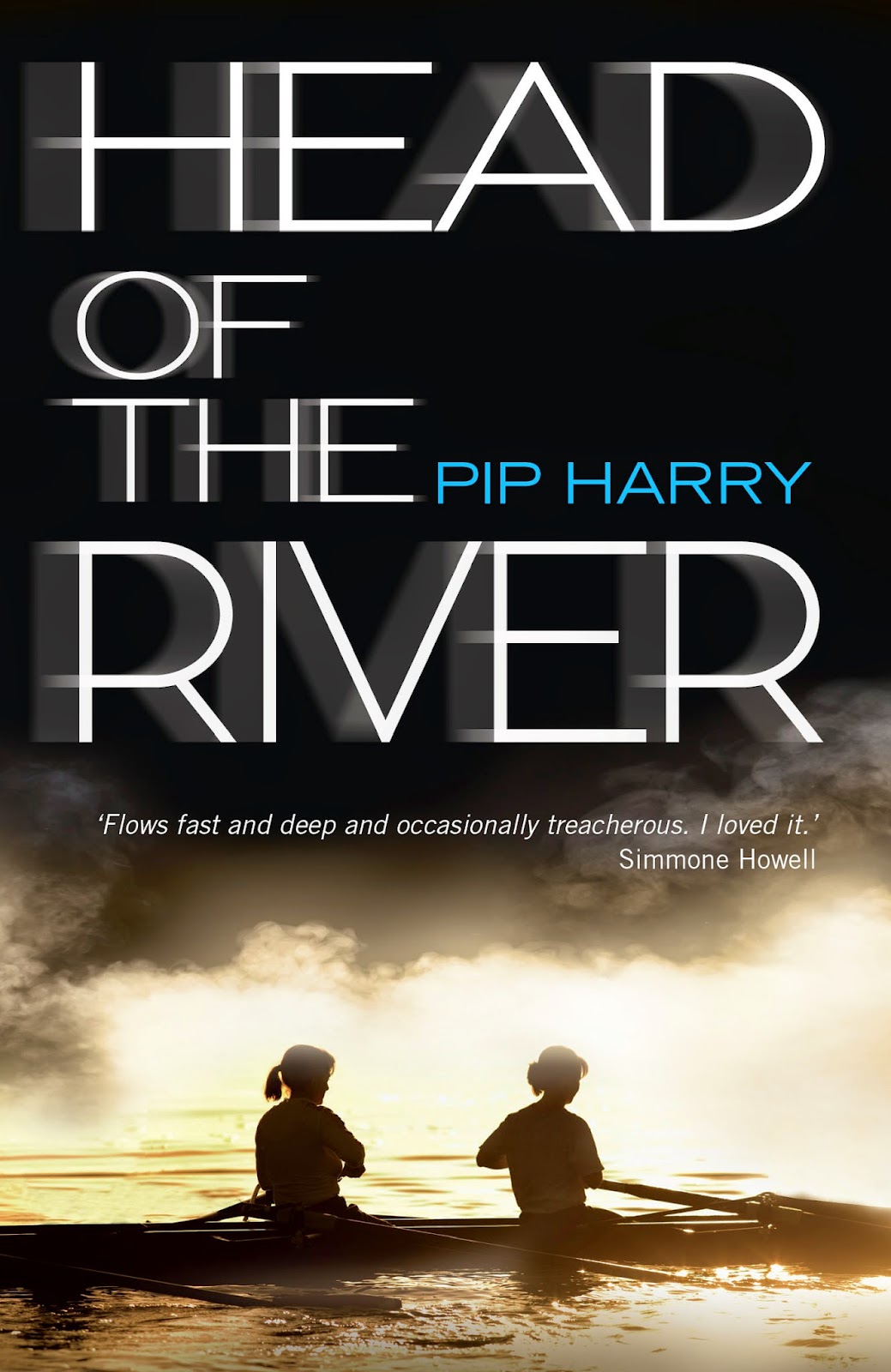 Pip Harry is an Australian health journalist, university lecturer and author of young adult fiction. Her novels include I'll Tell You Mine (UQP, 2012) and Head of the River (UQP, 2014, KBR review). You can visit Pip's website for more information about her books and other writing pursuits.
Share this article :
Share on FB Tweet Share on G+ Submit to Digg
Newer Post Older Post Home