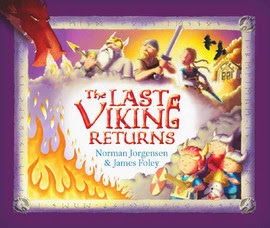 It's been a few years since we met Josh, the little boy who learned all about Vikings and changed his name to Knut, in The Last Viking. He's still very brave — braver than ever, in fact. But one thing has changed: his younger twin siblings are pretty much out of control, and the thought of what they might get up to does scare him!

Even the Norse gods, who've continued to keep a watchful eye on Josh/Knut since his last adventure, think the twins show potential to become real beserkers; they actually scare Thor!

So, when Nan and Pop decide to take the grandkids to Viking World, the scene is set for total mayhem. And when Thor decides to sneak away from Asgard to join them for the afternoon … well, mayhem just became probable catastrophe.

I won't tell you how a dragon called Fafnir, the mighty hammer of Thor, three kids and an authentic Viking funeral re-enactment all combine to create one huge adventure, but I will say that this is an action-packed, fun-filled romp that parents and kids will enjoy. Just as in The Last Viking, the illustrations add so much more detail to the story, and even the endpapers have a role to play. I hope this isn't the last we see of Josh and his Norse god friends.