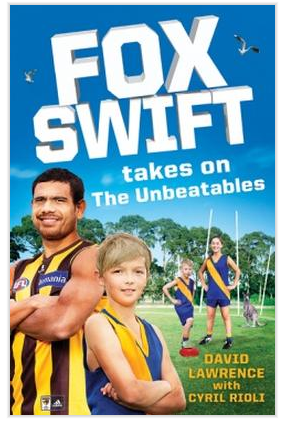 Fox Swift is an AFL footy lover, who has moved to a small town named Danival with his footy lover brother Chase, and their highly charisma skilled parents who know nothing about AFL …

Unfortunately, Fox has to choose between his friends' footy team the Diggers who are lowly skilled or the top class professional side the Dragons.

Last year, Fox had a great season, signing great recruits such as a tall player named Mo, who can torp the ball 50 metres and a boy who is actually a girl from Fox’s class. Paige Turner has a secret disguise--wearing a helmet that can snap some sneaky goals from forward pocket.

The Diggers are a very unusual team--the team mascot is a kangaroo and they have an insane player, and also Hawthorn star Cyril Rioli who has some tips on how to be better at the game.

On the Dragons side, Mace Winter and his dad Miles want revenge after the Diggers won the premiership flag last year. Their evil plan is to pay the best players in the comp to come to the Dragons (which is against the rules).

Do the Diggers win it two in a row? Do the Dragons get caught red handed? It's like James Hird getting caught putting steroids into Essendon (don’t get me started!).

I liked this book because it’s very addictive for a mad footy fan like me and it’s a book you can’t put down! Get out your money! Because this book is cheap at $16.95, and is recommended for ages 8 - 12.