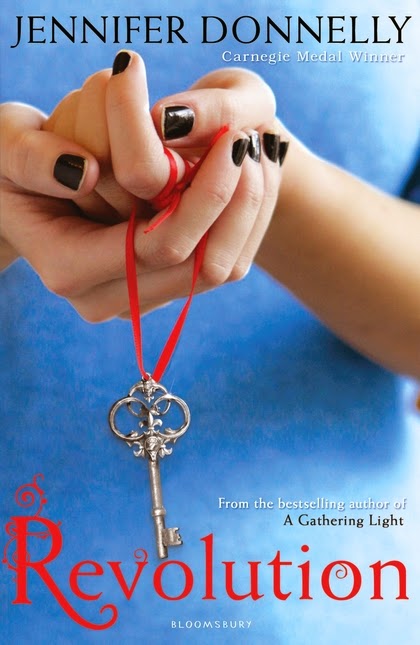 One of my favourite YA novels, Revolution is Jennifer Donnelly’s second historical-based teen novel. Her first, A Northern Light (US and Canada )/ A Gathering Light (Australia, NZ and UK) published in 2003, was very successful and awarded the Carnegie Medal.

Revolution is separated into three parts, inspired by Dante’s The Divine Comedy, ‘Hell’, ‘Purgatory’ and ‘Paradise’, which is reflective of the narrative.

She is a flawed and complicated protagonist who is so desperate for forgiveness and redemption she partakes in risky behaviour while her grades deteriorate. Her mother has had a complete breakdown and Andi’s estranged father shows up. He places Andi’s mother in hospital and leaves Andi no choice but to accompany him on a business trip to Paris so she can complete her musical thesis and not get kicked out of school.

In Paris, Andi stumbles across the hidden diary of a teenage girl from the French revolution, Alexandrine Paradis, and their stories overlap as does the DNA assessment Andi’s father is hired to examine. The story then splits into a dual-narrative. Andi becomes consumed by Alexandrine’s diary entries and the reader is transported to 1700s Paris. There are striking similarities between the two girls who are both flawed and broken.  Whilst in Paris, Andi (who has been given slightly too much freedom by her unquestioning father) also meets and spends time with a musician, Virgil, who believes in her.

Revolution is a story about how grief can rip you apart and how love can mend you.

Jennifer Donnelly has cemented her place as a talented historical fiction author. Her research is meticulous and her writing is rich, detailed and lively. In historical flashbacks within the diary entries, the prose is literary and the descriptions and setting of 18th Century France are fascinating.

I have been quite open about the regard in which I hold this author, not just for her writing skills, but her humanistic and compassionate Facebook and website causes. The rights of all Donnelly’s novels have been sold in numerous countries, particularly in Europe. Revolution and A Gathering Light/A Northern Light have won numerous awards. Donnelly has written a total of six novels and one picture book.