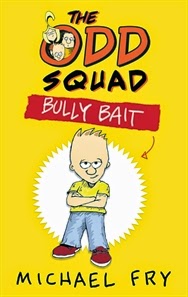 Michael Fry is a legendary cartoonist. And he’s funny: really funny. There was rarely a page of The Odd Squad: Bully Bait that didn’t make me smile. With over a hundred double-page openings, that’s a lot of funny.

But Michael Fry doesn’t do cheap humour at someone else’s expense. His protagonist is bullied, but he responds in a philosophical ‘someone has to do it’ sort of way; frustrated, but in a ‘there must be a graceful way out of this’ style; adorable in the way he shares every scrap of his ups and downs and funny.

Nick thinks he is the shortest kid on the planet, which must be why mutant troll bully Roy can’t resist stuffing Nick in his own locker. The longer Nick sits inside that locker, the worse will be his case of zombie butt, and zombie butt leads to log legs. You get the idea. Michael Fry’s pictures fill in any gaps.

The school counsellor says Roy has ‘issues’, which doesn’t help. The janitor suggests alternative strategies: one includes becoming part of the school’s Safety Patrol, which is just lame. But one thing leads to another and Karl (rather dim-witted), Molly (extremely tall) and Nick become the legendary Safety Patrol (better known as the Odd Squad).

With irresistible characters, a solid plot-line with plenty of ups and downs, and a life-or-death dilemma, you’ll love The Odd Squad. You can read more in the second book in the series, Zero Tolerance. The third book, King Karl, will be published in November 2014.