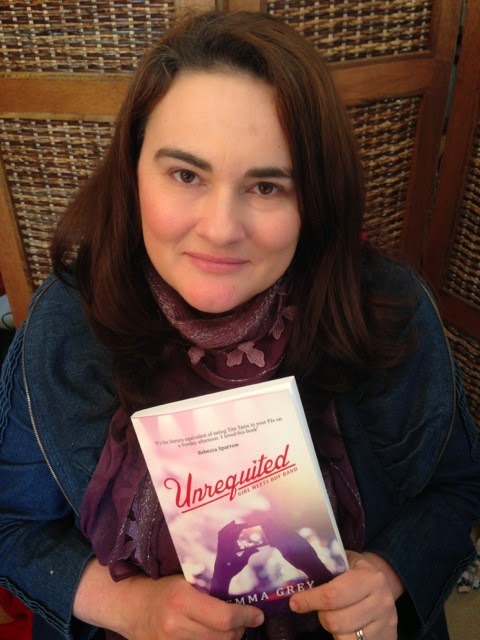 Kids' Book Review is delighted to welcome Emma Grey, author of the recently released YA novel Unrequited. We hope you enjoy Emma's insights into how she 'meets' her characters and how they direct the way her stories develop.

I recently met a stranger on a train. He sat in the seat right opposite the one where someone I know was sitting. It was weird, and unexpected—particularly as he ended up chatting with her, and even offering to pay her cab fare when the train broke down and she had somewhere she needed to be, urgently. Then he fell for her …

He was NOT supposed to be there. This story was never going to be a love triangle. He didn’t exist! Yet there he was, large as life, insisting that he mattered—and so I had to work with him.

A couple of scenes later, Sarah barged in. I’m not surprised, now that I know her—she’s used to things going her way, but to just turn up like that? Texting Joel (the train guy) during his uni lecture? It’s presumptuous! This isn’t even their story!

This was MY novel. What were these people doing, crashing it in such a fashion? It was going to be such a straightforward journey…

Meanwhile, I had to sweep all the junk off my desk, find the keyboard and get this down, because this was meant to be! How did I think the novel would possibly play out without these two? They’re crucial!

You hear of writers being swept away, almost as an ‘observer’ to the action, ‘channeling it’, hurrying to capture what’s happening as they watch it unfold outside of their control. That’s just how it happens for me. I don’t plan. I don’t plot. I just sit back and wait for things to develop, like a PI snooping in the car across the road, hoping I can type fast enough.

Sometimes the characters start up a conversation in my car. It’s hard, because my toddler is usually already talking, and my teens have their music blaring. I’m trying to concentrate on the road and commit what the characters are saying to memory.

It’s important to pay attention, because they take the story nowhere near where I’d take it, if I had any say. I’m just the narrator. Not the ‘person in charge’.

This is why I write. It’s why writing is as fun as reading for me, because it’s just as surprising.

When I was a little girl, I played with Strawberry Shortcakes and Smurfs and Lego people and Barbies and created their worlds. At fourteen, I started writing my first novel about an Australian girl named Rebecca, who lived in a country town and fell for a nice boy just like Anne’s Gilbert Blythe, and it was truly atrociously written. Seriously - it was awful! (I still have it.) But that didn’t matter.

Stranger on the train, it’s nice to meet you.

It’s nice to meet all of you, and escape with you. 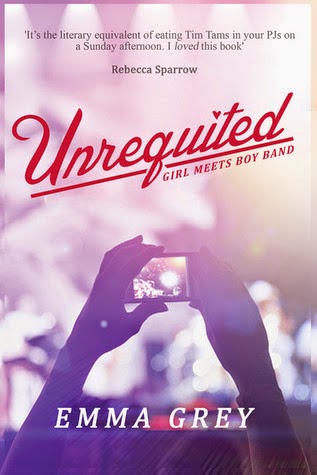 Emma Grey is the author of the teen novel, Unrequited: Girl Meets Boy Band (KBR review). She’s the mother of two teenage girls and a little boy. Her first book, Wits’ End Before Breakfast! Confessions of a Working Mum was published by Lothian in 2005. Visit the Unrequited website for more information about the book including sample chapters.
Share this article :
Share on FB Tweet Share on G+ Submit to Digg
Newer Post Older Post Home