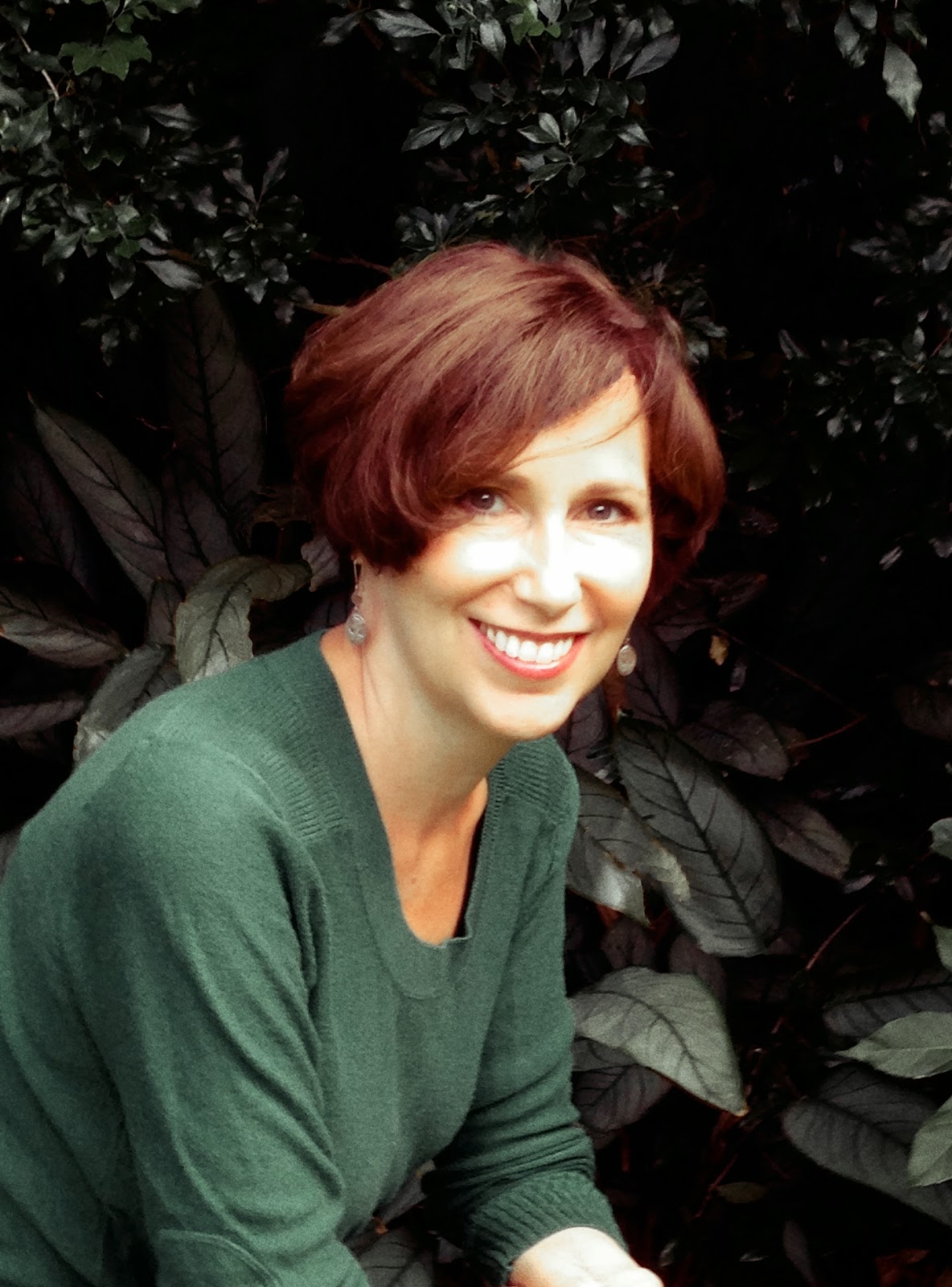 Kids' Book Review is delighted to welcome illustrator Marjorie Crosby-Fairall. As part of The Croc and the Platypus blog tour, Marjorie is giving us a fascinating glimpse into her illustration process for one of the gorgeous images in this new picture book written by Jackie Hosking and published by Walker Books. See below for links to the other blogs included on the tour.

I suppose every illustrator takes a different approach to creating a picture book. I’m more of a ‘planner’ than a ‘fly-by-the-seat-of–your-pants’ girl—my work is pretty systematic. To illustrate my process, I thought I would take you through the development of one spread from The Croc and the Platypus. This spread had more changes than any other in the entire book. It shows how an image evolves and a little bit of the collaboration with Donna Rawlins, my art director and Mary Verney, my editor at Walker Books. 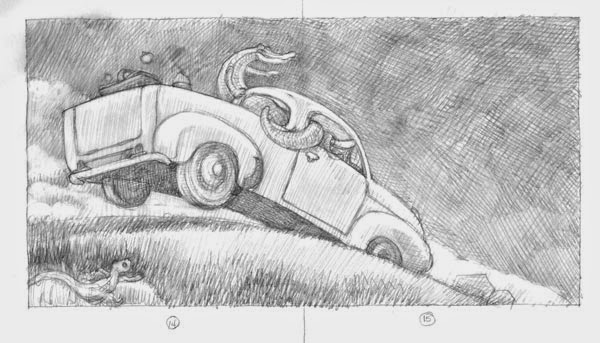 Storyboards are small A4 roughs of the entire book and they are the first stage to receive feedback from the publisher. The storyboard above received the comment that it would be good to include sheep or shearers to aid the transition to the following spread. The general storyboard feedback included a comment that it would be good to show the Ute from the distance somewhere in the book.  I thought these were very valid points so I incorporated both comments into the revisions for this spread. 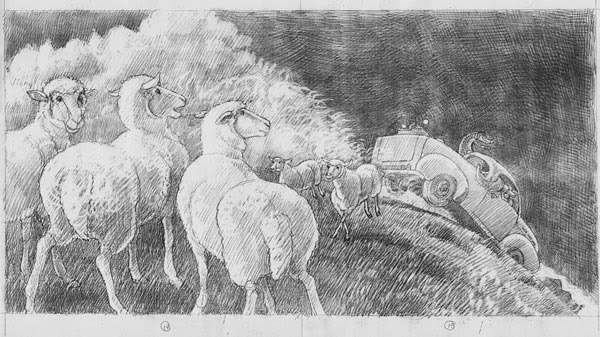 You will see that I added some rather bemused sheep watching the Ute bounce over a hill to the Shearer Shed. This Final Rough stage, drawn at the same size as the printed book, goes back to Donna at Walker Books for feedback. Luckily, she gave me thumbs up and an okay to go to colour artwork. 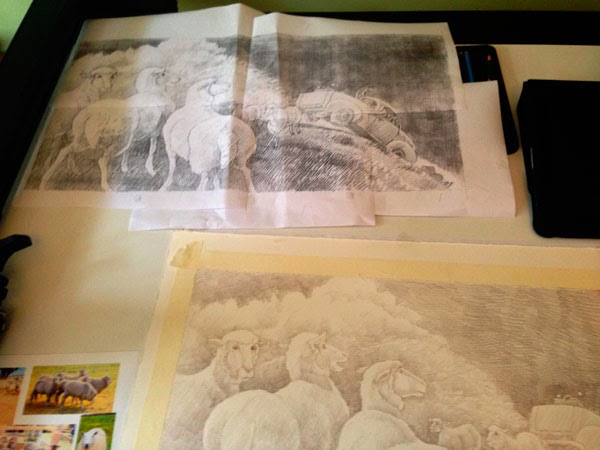 This snap of my desk shows the beginning of final art. I’ve enlarged the rough 110% and started to redraw it onto heavy watercolour paper. I chose just a small enlargement because I didn’t want the final image to lose the texture of the pencil lines and brush marks when it was scanned and reduced for print. 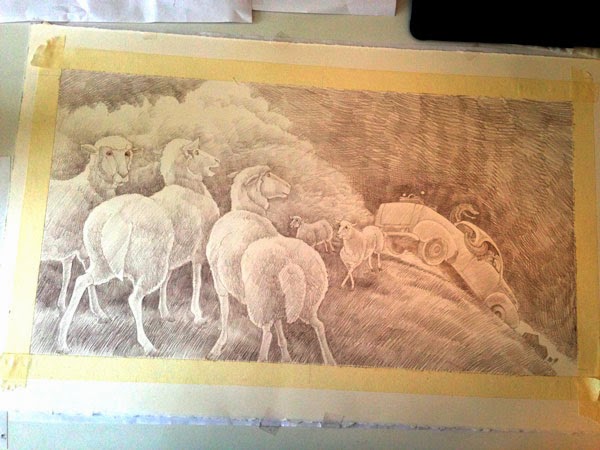 I’ve redrawn the image roughly onto the watercolour paper. I do this partly because it sets the values and partly because I wanted some of the line work from the under drawing to show through. 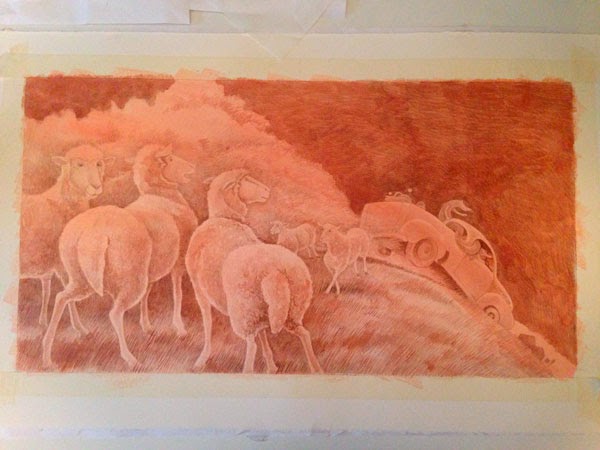 Because the story takes place in the Outback I wanted a tint of ‘red earth’ to show through so I continued the under painting with a terracotta orange. It can be pretty scary to slap that orange on the first time, but after a while it’s quite therapeutic! 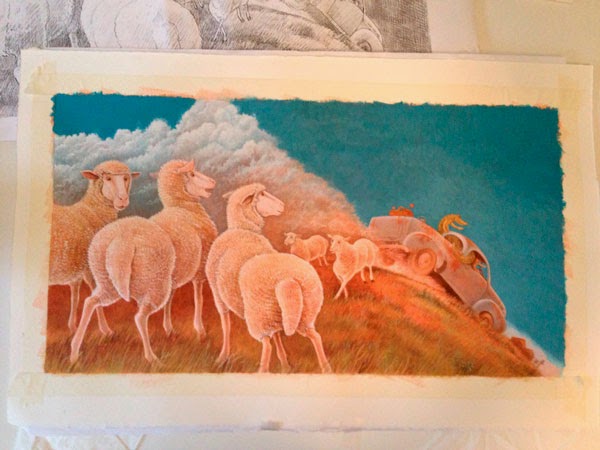 At this point, I have a lot of the colour down but I realise that there is something not working—unfortunately I can’t determine exactly what that is. This is when I use the time-tested method of putting it away in a drawer and moving on to something else! 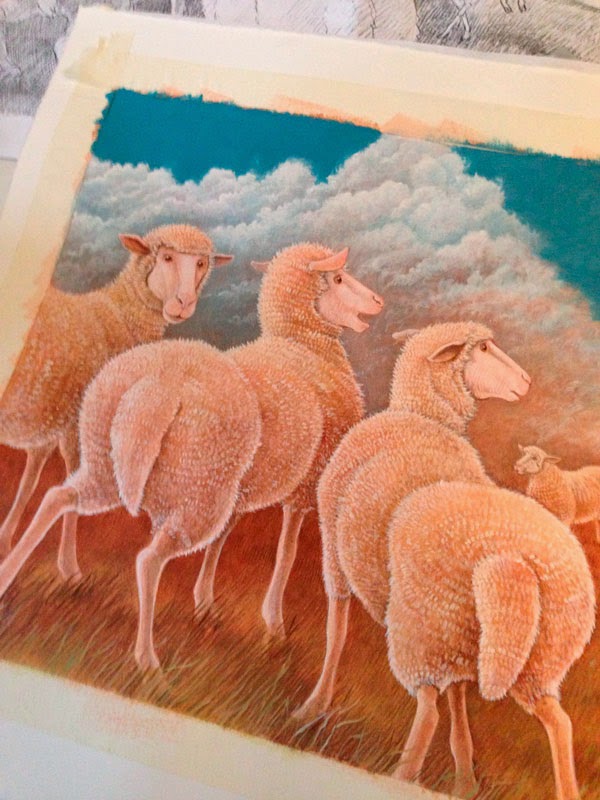 When I finally unearth the drawing from my map drawer, I realise that it is the dust cloud from the Ute that is not working. It is merging with the low lying clouds and looking like a massive storm. Unfortunately, this involves a total rework of the sky. 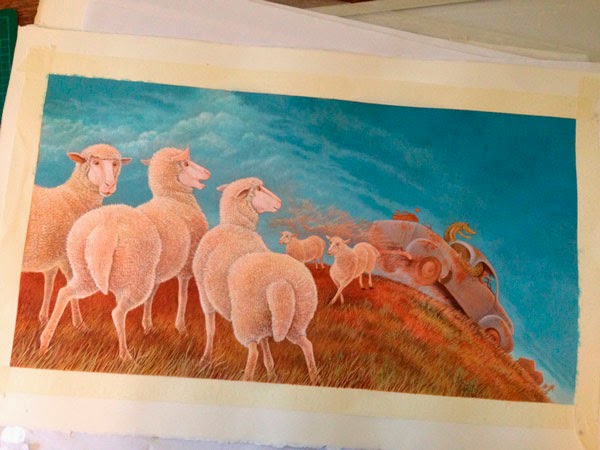 The sky here is a work in progress and I discovered that it has shifted the balance with the sheep so they need a total rework as well. It’s a domino effect! 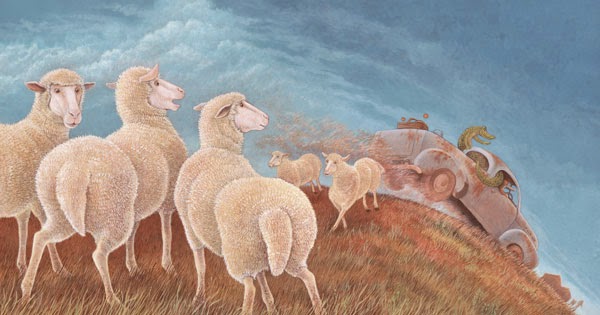 The Final Image as used in the book.

So it was a bit of a bumpy ride with this particular spread, but like the characters in the book, it ended with a happy dance! 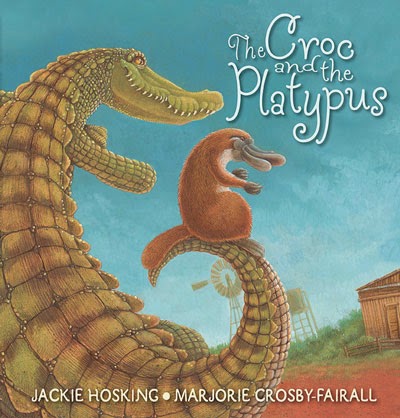 Marjorie Crosby-Fairall lives in Sydney and spends her days happily illustrating books. She was awarded the CBCA Eve Pownall Award for her first picture book Killer Plants (Penguin) and My Little World (Omnibus) was shortlisted for the 2012 Wilderness Society Environment Award. Her newest book The Croc & the Platypus (Walker Books) was released July 2014.