Shout Out: The Cryptic Casebook of Coco Carlomagno and Alberta 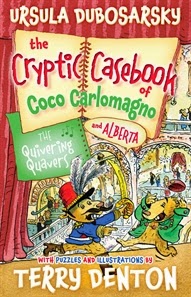 Meet Coco Carlomagno, Chief of Police in Buenos Aires, and his cunning cousin Alberta. Together they solve crimes by thwarting the plans of criminal masterminds and clearing up misunderstandings and confusion.  Who are these amazing crime-fighters and defenders of public order?

Why, they are guinea pigs, of course!

Dubosarsky’s clever text is filled with puns, word play and a selection of Spanish words (glossary included) that will tweak the interest of advanced and independent readers, while the entertaining story, ratio of text to illustrations, humour, and challenge of ‘solving’ the crime before Coco and Alberta will appeal to reluctant readers.

There are currently five titles available in the series with a sixth book scheduled for publication by Allen & Unwin in November 2014. In each case, the sensible and clear-thinking Alberta travels to Buenos Aires to help her cousin Coco solve a crime that threatens to overwhelm him and cause chaos in the city. From perplexing pineapples to distraught operatic divas, Alberta and Coco always manage to solve the crime in the end and save the day.

Personally, I find it hard to resist the concept of guinea pig detectives roaming the streets of Buenos Aires and I particularly enjoy finding out what mangled version of Coco’s name will appear at the end of each book (Chico Chompomucho? Clicko Crockemboco) and his ever expanding list of commendations, which relate to the crime solved in each book.