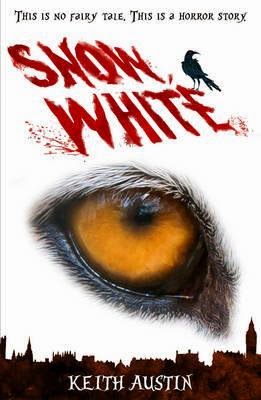 John Creed's life is pretty average. He's a smart kid who's tormented by the school bully, Caspar Locke — perhaps because of his stutter, but probably just because Caspar's decided to hate him.

He lives with his grandfather, Mordecai, who insists on teaching him an obscure gypsy language. He can't take his eyes off white-haired Fyre King, a girl whom he'll probably never summon up the courage to actually speak to.

And every night his dreams are haunted by the image of a white wolf.

Then, one day, it starts to snow and pretty soon his average life has got much worse. Suddenly sparrows are everywhere, wheeling through the sky in great flocks and descending on parks in waves to  pick at the crumbs he hands out. There are crows too — but these aren't normal crows; these all have just one eye in the middle of their forehead. Wolves have been sighted in Scotland and seem to be coming closer to where John lives. Caspar has upped his vendetta to a new level of violence. John's old scars — supposedly a legacy from the car crash that killed his parents — are now a throbbing livid brand on his face. Mirrors are doing strange things when he looks at them. And it just keeps … on … snowing …

The only good thing about it all is that Fyre seems to want to be his friend. But as events quickly spiral frighteningly out of control, John realises that Mordecai hasn't been telling him the truth about his past or his parents, and that nobody is who — or what — he thought they were. Not even Fyre.

This is Dean Koontz meets Little Red Riding Hood. Original, well-written, and with carefully crafted characters, it's good horror. I read Snow White in pretty much one sitting … and then checked that my windows and doors were locked before going to bed!