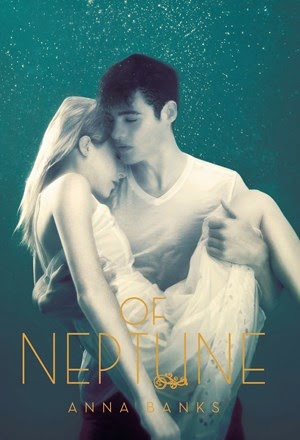 Now that the plot to cause turmoil in the underwater kingdoms of Poseidon and Triton has been overturned, Emma and Galen want nothing more than an opportunity to have some time to themselves. Emma has been accepted, with much reservation, by the kingdoms despite the fact that she is not a full-blood Syrena. She can now join Galen underwater, but instead the couple decide to travel inland, so that they can have some time together away from their families and responsibilities.

Following a suggestion from Emma’s grandfather, the Poseidon king, they travel to a small town called Neptune, where Emma is shocked to discover other half-breeds like herself. She finally feels like she has somewhere that she belongs, but Galen isn’t so sure. Something isn’t quite right in the town of Neptune and Galen is wary of trusting anyone, especially handsome half-breed Reed, who doesn’t bother to hide his attraction to Emma.

Now that Emma and Galen have overcome the attempts to keep them apart underwater, will they survive the new challenges they face on land?


I started Of Neptune, the conclusion to Anna Banks’ fantasy Syrena Legacy trilogy, with some hesitation. With most of the challenges facing Emma and Galen resolved at the end of the second book, Of Triton, I was prepared for this final book to be focused mostly on Emma and Galen’s relationship. The first chapters of the book seemed to support this assumption, but the story quickly became far more complex as Emma and Galen stumble into a situation that is far more dangerous than either of them could have anticipated.

There is, of course, some relationship tension thanks largely to Reed’s presence and his obvious interest in Emma. This is only part of the very engaging plot of Of Neptune, however, as Emma and Galen discover that some of those involved in the plot to overthrow the kings of Poseidon and Triton have connections in this unassuming town and they aren’t happy that their plans have been thwarted.

A fast-paced plot with plenty of action and suspense with a touch of romance will keep readers turning pages. Of Neptune is a wonderful conclusion to a great series that has managed to combine fantasy elements with a real world setting and relatable characters.

See our review of the first book in the Syrena Legacy, Of Poseidon, here.