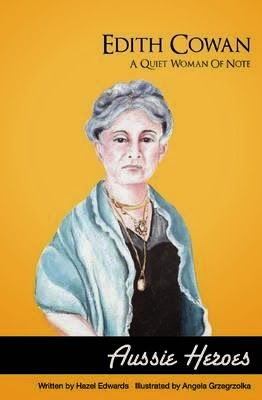 The life of Edith Cowan began rather perilously. Born to a tough life on a remote Western Australian sheep station, Edith suffered the early death of her mother and loss of her baby brother. At the age of just seven, she was sent to a boarding school in Perth with her sister, and seven years later, at the impressionable age of fourteen, her father Kenneth Brown was hung for murdering his second wife. The intense scrutiny and stress this young girl would have suffered, is incalculable.

Thankfully, Edith’s life stabilised somewhat when she met the younger brother of the women who ran Misses Cowan’s Ladies’ Boarding School—James. The two were married when Edith was just 17 and they went on to have five children. James was an endless support for his wife, who spent her time volunteering and championing health reforms for women.

James was a registrar and later a magistrate for the Supreme Court and through her husband’s work, Edith learned much about gender inequality and a decidedly archaic legal system. She began championing changes that brought better social welfare to women and children, and, along with James, supported such initiatives as intolerance for domestic violence, and electoral reform to give women the right to vote.

Edith felt that in order to effect positive social change, education was vital for women and girls. She became president of the Karrakatta Club which helped hone her political ethos and public speaking skills, and her tireless efforts eventually led, in 1915, to her appointment as a magistrate to the Children’s Court, one of the first female magistrates in Western Australia. Just six years later, she became the first women to be elected to Australian parliament, winning the seat of West Perth.

This account of Edith’s extraordinary life—one of considerable quiet achievement—is a must-read for students studying the impact of social change on Australian society, spearheaded by extraordinary women like Edith Cowan. Our children know so little about this remarkable woman, and Hazel Edwards’ account of her astonishing legacy is long overdue.

This junior fiction book is interspersed with full colour images by Angela Grzegrzolka and cleverly switches between factual information and narrative. A timeline at the end of the book is helpful for in-class learning.