Shout Out: The Last Thirteen 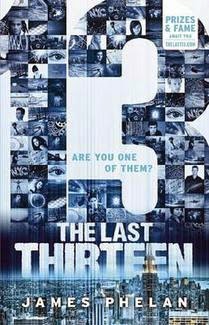 It all began in September 2013 with the launch of an adrenaline-packed new thriller series for kids. Written by best-selling Australian author James Phelan, The Last Thirteen is a series of thirteen books filled with action, adventure, conspiracy theories, betrayed trust, international travel, espionage and cliff-hanger endings all racing towards the final book, which will be published in December 2014.

The series begins with Sam discovering that everything he thought he knew about his family is false. He is kidnapped from school and his life is immediately thrown into chaos as he is told his parents aren’t who he thinks they are and he has two different top secret organisations trying to find him. Who can he trust?
Sam discovers that he is part of an ancient prophesy, destined to take part in a battle to save the world. Sam must find the other members of the group of the last 13 Dreamers if he is to have any hope of winning in the final confrontation against Solaris, the ultimate enemy of the human race.

It isn’t too late to join in this addictive adventure. The Last Thirteen: 7 has just been published by Scholastic, with the final six books in the series to be released over the coming months until the last book becomes available in December 2014.

A fantastic series for middle readers aged 10+, The Last Thirteen sees Sam and his allies travel around the world looking for the other Dreamers and trying to overcome the plots of the supporters of Solaris. The Last Thirteen website includes a countdown each month to the release of the latest book, information about each book and author James Phelan, and details about monthly competitions.

The Last Thirteen is another great serialised adventure series sure to appeal to readers who enjoyed the Conspiracy 365 series and those moving on from The 39 Clues and Infinity Ring series.

See our review of The Last Thirteen: 13 here.