Review: Take Back the Skies 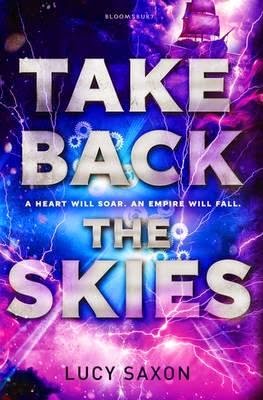 Catherine Hunter is the privileged daughter of a senior government official on the island of Anglya. She has plenty to eat, lots of beautiful clothes and, above all, is safe from the 'Collections' in which children are taken when they turn thirteen to serve in the war effort against the other islands of Tellus. On the surface, it would seem Catherine is lucky indeed.

But Catherine's father is cold and cruel. Her mother is bedridden and growing weaker. And Catherine is soon to be married to the son of another government official, whom she hates. It's life in a glorified prison and one that Catherine wants desperately to escape.

Changing her name to Cat and disguising herself as a boy, she pretends to be a child escaping the Collections and stows away on the skyship Stormdancer. It's not long before she's found by the enigmatic Fox and introduced to Harry, the captain; his wife Alice; and Matt and Benny, the rest of the crew. Accustomed to working outside the law themselves at times, the crew welcomes her — but what will happen when they find out who she really is? And what will Cat do when she finds out the truth behind the Collections and Anglya's war — a truth that is intricately entwined with her family and her future?

This is Lucy Saxon's debut novel, the first in a series of six planned around the islands of Tellus. It's a fast-paced page-turner with a tight, compelling plot and engaging characters. What's remarkable is that this detailed world-building has been achieved by an author who was sixteen when she wrote the story, and is only nineteen now! I can't wait to see what she will deliver as she grows in maturity and writing experience, because it's clear she is an immense talent who has already delivered a book sure to attract a legion of followers.