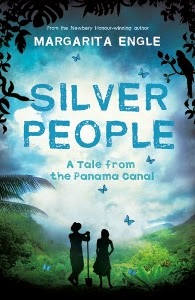 How much do you know about the building of the Panama Canal?

I must confess that I haven’t given this incredible feat of engineering all that much thought. As a result, I started reading Margarita Engle’s Silver People with few preconceived notions of how the Newbery Honour-winning author would portray the building of the dam in this book published to coincide with the 100th anniversary of the opening of the Canal.

Within the first few pages, I was completely captured by this incredibly evocative verse novel sharing the experiences of those involved in the building of the dam. Young men and boys who travel from their homes with promises of riches and the opportunity to be part of the Eighth Wonder of the World, discover instead that their days are filled with back-breaking work and the ever present threat of mudslides and malaria. These are the silver people, men of coloured skin paid very little for their life-threatening labour and treated as second-rate citizens by those running the project (who are, of course, paid in gold).

The story spans from 1906 to 1915. Primarily through three central characters – 14-year-old Cuban Mateo, Jamaican Henry who works in the most treacherous areas of the build, and Anita, a local girl versed in the medicinal plants and herbs of the area – a story slowly builds of intolerance, racism, and disregard for the environment and human life in the pursuit of a miracle of engineering and progress.

The reflections from Mateo, Henry, Anita and others (including surveyors, engineers, nurses and visiting American President Theodore Roosevelt) paint a very personal and emotional picture of the impact of the project on the lives of those involved. Regular sections capturing the ‘thoughts’ of the animals and trees whose habitat was being destroyed to make way for the canal offer another interesting perspective on the development, lending the story even greater depth and complexity.

Silver People is a beautifully written tribute to those people who sacrificed so much to create the Panama Canal – those who left their homelands and those whose homeland was destroyed through this monument to the ingenuity of mankind. It is sure to appeal to those with an interest in history, particularly the Panama Canal development, and the issue of racism in the early 1900s, but even more it will appeal to those who enjoy books that draw out an emotional response and connect the reader with the experiences of the characters in a way that creates a lasting impression.

This is a story that lingers and one that I know I will return to again.

There are teachers' notes available for this book.