Review: One Day in Oradour 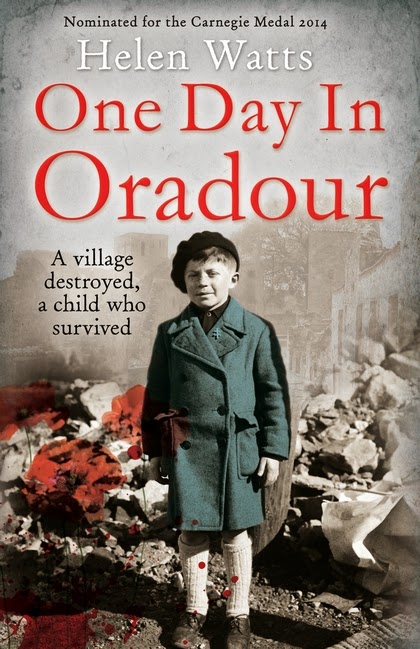 June 2014 is the 70th anniversary of a massacre which took place in Oradour-sur-Glane. I had never heard of the small French village, nor the events that happened there during World War II, until I discovered this book.

One Day in Oradour is a fictional account of true events that took place across the course of a single day in the summer of 1944, when German SS troops killed 644 people - almost the entire village. Just 86 people survived, only one of them a child.

The book starts as the villagers go about their lives on a busy Saturday. The adults bake bread, have their hair cut, and prepare for the next day’s religious festival. The children are at school, where they are joined by children from the surrounding region to undergo a routine health and vaccination programme. Meanwhile, a German officer has been kidnapped by the French Resistance.

The hours tick by like a movie playing out, and bit by bit the history and actions of central characters are revealed - the curious seven-year-old boy, the unpredictable SS officer bent on revenge, and the unsuspecting villagers. By alternating perspectives, the author builds the tension, and explores what could have led those involved to their actions on that fateful day.

Knowing the horrific ending at the outset of the story makes One Day in Oradour so much more gut-wrenchingly emotional. As does the the book’s cover photograph of Roger Godfrin, the only child who survived (fictionalised in the story as Alfred Fournier). He survived because he was determined to follow the instructions his parents gave him to hide if the Germans ever came, and he spent the afternoon trying to elude the soldiers. Tragically, his two sisters, brother and both his parents were amongst the many killed.

Stories spark discussions, and while reading One Day in Oradour I mentioned it to a French friend and found that she has a family connection to the region. She described that day as still being like an open wound for many people. However, one of the things about the power of storytelling is its importance in recording the good and the bad, and using it to remind people of the impact of such terrible behaviour. For those who have no experience of such things, it can be vital to gaining a better understanding of history.

This was one of the influences on author Helen Watts in writing the story. She explains it in the epilogue (her notes on the true story of Oradour-sur-Glane) which I would urge you not to skip:

“It would be all too easy to shy away from revealing the true extent of the SS soldiers’ cruelty. It might be less risky, too, to change some of the more gruesome details out of fear of upsetting the reader. But to do either of those two things would be to do a disservice not only to those who lost their lives or loved ones that day, but also to the reader. For this is a story which can open the reader’s eyes to the extremes of human behaviour. It can hold up a mirror to a world in which, side by side, there can exist a man like [the SS officer], who is willing to order the mass slaughter of hundreds of innocent people, and a seven year old boy … who has the courage and sheer determination to survive against all odds while his world is turned upside down around him.”

One Day in Oradour is a confronting story which doesn’t pull any punches, but it’s an important one.

Watch Helen Watts’ video introduction to One Day in Oradour.