Review: The Fairy Who Wouldn't Fly 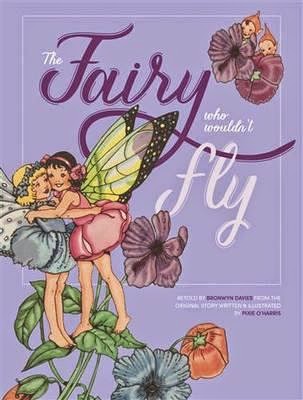 As adults, Australian classics sit at the heart of our childhood--and while new classics are being published all the time, there is some kind of deep emotional satisfaction in offering the books we loved as children, to our own children.

Pixie O'Harris was born in Wales and emigrated to Australia where she worked as an artist, cartoonist and illustrator for newspapers, magazine and books. A true Renaissance woman, she was also an author, broadcaster, and designer of items such as sheet music covers, stationery and book plates. She loved to paint murals in children's hospital wards, and in 1977, became patron of the Royal Alexandra Hospital for Children.

The books of Pixie O'Harris are a beloved addition to the Australian children's literature collection, and this new edition of The Fairy Who Wouldn't Fly (originally published in 1945) would readily delight modern kids.

The Fairy Queen thinks our little fairy is lazy and banishes her to Woodn't, the place where creatures are sent when they do what they shouldn't. Along with her dear animal friends, the fairy finds a way to return to Fairyland, and to show the Fairy Queen there should no longer be so many 'shouldn'ts'!

Beautifully retold by Bronwyn Davies, the book features O'Harris illustrations from the original book, along with additional pictures from the National Library collection, making it a truly archival production that will delight families for many years to come.

Gorgeously-designed with both black and white and full colour plates that will have adults winging back to childhood, The Fairy Who Wouldn't Fly would (and should!) make for a divine birth or Christening gift.