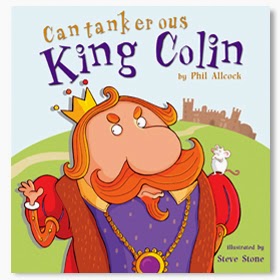 King Colin is NOT in a good mood. He woke up feeling cantankerous and throughout the day he manages to be silly, smelly, grumpy, crazy and, to be honest, a bit of a pain in the butt to everyone he meets. He won’t listen to reason and simply informs everyone that he can do what he wants because he is the king.

Is there anyone who can pull King Colin into line and put an end to his cantankerous mood?

I think it needs to be said that the word cantankerous is not used nearly enough in children’s books. It is such a great word and it describes so perfectly that refusal to listen to reason, insistence on doing things their own way attitude that is so much part of the toddler and pre-school years.

This silly story about a king determined to be difficult will delight young readers, who will no doubt completely miss the fact that they may be guilty themselves of acting in a similar way. The illustrations by Steve Stone are appealing and parents, particularly mothers, will enjoy the way the story resolves with a voice of authority putting an end to King Colin’s silliness.

While not the first picture book to feature grumpy, petulant royalty, Cantankerous King Colin is sure to entertain young readers with the childish antics of the king and his determination to be difficult.