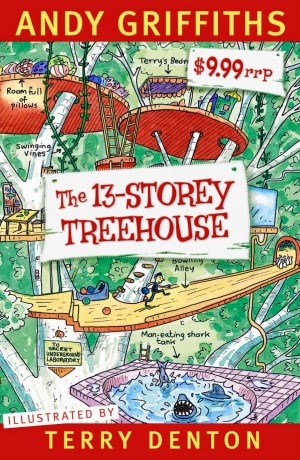 I was recently given two tickets to attend a performance of The 13-Storey Treehouse at Laycock St Theatre in Gosford with my 10-year-old son Matthew, who is a big fan of the Treehouse book series by Andy Griffiths and Terry Denton.

The play is an adaptation of The 13-Storey Treehouse (KBR review) by playwright Richard Tulloch, who wrote a fabulous guest post for KBR last year about the process of adapting a book for performance. You can read ‘From Page to Stage’ here.

Matthew and I both thoroughly enjoyed the performance which was a wonderful celebration of imagination and humour. Matthew has very kindly agreed to answer a few questions about the show:

What did you enjoy most about the performance?
I loved the 2D – 3D converter. It was very funny and interesting and really made it look like things were appearing. Also, Andy and Terry were interesting and had a great sense of humour.

Was it the same as the book? What was different?
The play was kind of the same, but instead of writing a book, they were doing a play. Andy and Terry thought it was a dress rehearsal, but really it was the actual thing. Val was the stage manager of the show and she had to replace some of the characters because apparently the actors were ‘sick’ (that’s what Andy and Terry told her so that she would agree to help).

What were the performers like? Were they like the characters in the book?
In the book, Andy and Terry were full of humour, and in the performance they had just as much humour as they did in the book. Val tried her best to pretend to be a mermaid, sea monster, Bill the postman and Jill.

Did anything about the performance surprise you? Was the show what you expected?
The play definitely was not what I thought it would be like. In fact, I thought it would be almost exactly like the book! The scaffolding, props, and the 2D – 3D converter made the play excellent. I didn't know how they would include the flying cats in the play, but they did and it was very funny.

If you get a chance to see either show, I highly recommend you do so. The theatre was filled with laughter and smiles for the entire peformance and the children around me barely took their eyes from the stage. I am definitely keen to see the next instalment of this great story.

Details
The 13-Storey Treehouse (presented by CDP)
Stageplay by Richard Tulloch
Adapted from the book by Andy Griffiths and Terry Denton.
Directed by Julian Louis