Review: Mr Miniscule and the Whale 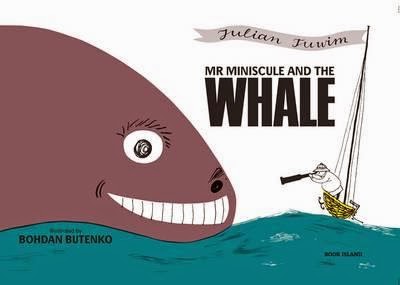 Mr Miniscule is, as his name would suggest, very small. In fact, he's half the height of a coffee bean. But his adventurous spirit more than makes up for his lack of size!

After travelling far and seeing much, Mr Miniscule has one ambition left: to see a big blue whale. So he sets out to make his dream come true.

From half a walnut shell, he builds himself a boat and once he's packed his supplies, he catches a butterfly plane (complete with his boat) and flies to the nearest port. And from there he sets off on his voyage of adventure, sailing for months … and months … without any sight of a whale.

Then, one day, he comes upon an island. But this is no ordinary island. For one thing, it sneezes!

Mr Miniscule and the Whale is a classic Polish children's story written by one of their best loved poets, Julian Tuwim (1894–1953). In this English version, the rhyming text is beautifully accompanied by acclaimed Polish illustrator Bohdan Butenko's simple yet engaging illustrations in shades of blue and yellow. It's a delightful story that will hopefully now reach a wider audience.