1. Tell us something hardly anyone knows about you.
I’m a super-knitter. I’m on a sock jag now.

2. What is your nickname?
Lex

3. What is your greatest fear?
My own death, or the death of the people closest to me. I get dizzy thinking about it.

5. Tell us five positive words that describe you as a writer.
Humorous, clear, brave, persistent, and disciplined.

6. What book character would you be, and why?
Elizabeth Bennet from Austen’s Pride and Prejudice. Was there ever another heroine so sparkling, clever, and mischievous? And she got to marry the adorably uptight Mr Darcy.
7. If you could time travel, what year would you go to and why?
After writing Slave Girl and Talk Like an Ancient Egyptian, I’d have to say New Kingdom Egypt, during the 18th Dynasty. That’s as long as I had a safe way home again (the head lice alone would kill me, and I’d miss proper showers).

8. What would your ten-year-old self say to you now?
Wow, look at you, life got so much better! (I was a prime target for bullies at school).

9. Who is your greatest influence?
My mother. Not because she’s bookish, because she isn’t, but because she’s the most competent person I know. She was an immigrant who didn’t speak English entering high school but went on to become a doctor; she’s a woman who, eight months pregnant, changed the tyre on a car without fuss; she played championship bridge.

She always said, ‘if you want to write, sit down and write’. Priceless advice.

10. What/who made you start writing?
Hard to say. I only remember never wanting to do anything else.

11. What is your favourite word and why?
Cup. It sounds just like what it is.

12. If you could only read one book for the rest of your life, what would it be?
Whoah – no pressure, right? After thinking about it, I decided: a) I better not have read this book yet or I’ll be bored, and b) it should be really long, so I can eke it out. I looked up the longest books ever published in English and they’re all veerrrrry serious. The best balance between interest and length I could find was Infinite Jest by David Foster Wallace (clocking in at 543,709 words), although it doesn’t look very funny. Hmmm. 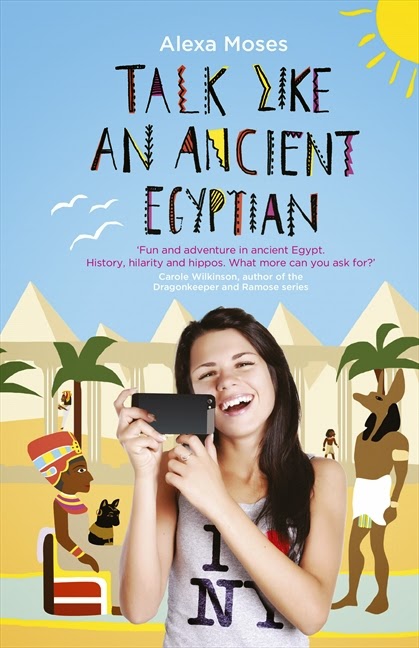 Alexa Moses is an Australian screenwriter and novelist. Her most recent novel, Talk Like An Ancient Egyptian (published by HarperCollins in May 2014), is a sequel to her debut novel Slave Girl. You can find out more about Alexa and her writing at her website.
If you are an author or illustrator who thinks they are BRAVE enough to answer our questions,
OR if there is an author or illustrator you would like to hear from, LET US KNOW!
We will see if they are up to the task. Just email: susanATkids-bookreviewDOTcom
Share this article :
Share on FB Tweet Share on G+ Submit to Digg
Newer Post Older Post Home