Review: While We Run 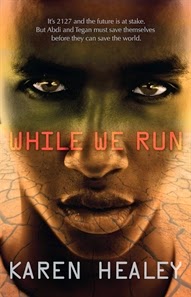 It is 2127. Abdi and Tegan are the public face of the Ark Project, an international campaign to recruit volunteers for the colonisation of a new world in space, but there’s a massive problem. The new world that Abdi and Tegan are forced to promote is a giant propaganda exercise.

Told from Abdi’s point of view, we live his fears, emotions and confusions. When Abdi and Tegan escape, they are determined to find out the truth about the Ark Project, but will they survive long enough to find out?

This story about a small resistance movement taking on the might of the Australian Government in a time when the world’s resources are dwindling hits a little too close to home. Australia’s borders are closed. No one is allowed in without government permission. Gone are the days of immigration programs and student visas. Is the Ark Project one big assassination scheme? A way to reduce the population?

You’ll have to read it to find out.