Review: The Story of Buildings 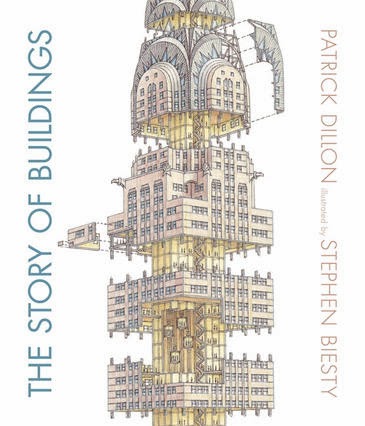 “Every building has a story to tell” and The Story of Buildings is a fabulous trip through time and technique.

Featuring cross sections and exploded diagrams of sixteen significant buildings, and with fold-out pages to show them at their best, there is a lot to learn in what amounts to a potted history of “world architecture from the pyramids to the Pompidou Centre”, in a book which is packed with facts and historical anecdotes.

The Story of Buildings begins with a reminder that buildings are quite simply shelters which have evolved as people experimented with materials and ways of using them. Learn about English, Flemish, and common or American ways to use bricks, underfloor heating in Roman times, and how the Industrial revolution changed the way buildings were made.

You’ll travel around the world and through time, from the pyramids to the Parthenon, through the Middle Ages to the Gothic and Renaissance eras, and on to the twentieth and twenty-first centuries. Take a close look at iconic buildings like Notre Dame, the Taj Mahal, the Chrysler Building, Vaux-Le-Vicomte, and the Forbidden City, as well as simpler constructions like log cabins, igloos, bridges and terrace houses. And at its conclusion, The Story of Buildings showcases an energy efficient straw bale house which makes contemporary use of what are at heart traditional building techniques.

The author and illustrator each share their personal and professional passion for the subject matter (one is an architect and historian, while the other simply loves history, architecture and drawing). This makes for a book perfect for anyone with an interest in the construction of buildings, learning about a variety of architectural styles, and how mankind has developed the built environment. It’s equally suitable for school assignments and includes a simple timeline and detailed index.

I spent quite a while pouring over the diagrams throughout The Story of Buildings, and I’m sure I’ll be going back to browse through it again and again.