Review: Tensy Farlow and the Home for Mislaid Children 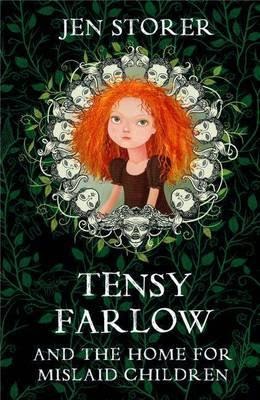 A baby, born at midnight on a Friday, it is commonly believed, will be able to see ghosts. When a teensy flame-haired baby is dumped in a linen basket on the steps of an ugly old hospital, the combined fates of many become inextricably linked.

While collecting linen from the hospital, mild-mannered Albie Gribble snatches the linen basket and tosses it into the back of his lorry, then heads towards the River Charon, unaware his life is about to be altered forever.

The lorry tips into the river, almost drowning Albie and the baby. Enamoured with the child, he names her Tensy Farlow and takes her home, but his mother, Mrs Gribble, isn't happy. Babies are trouble. Against Albie's wishes, she contacts the Department for Mislaid Children who collect the child.

Heartless Matron Pluckrose of the Home for Mislaid Children, is thrilled. Babies can bring the Home lots of money, and the flame-haired child is soon adopted by a wealthy couple.

Ten years later, the child appears back at the home. Her abominable adoptive parents no longer want their young charge--she has served her purpose to procure an inheritance (a sum they would have lost had they no child of their own) and now they want to hand her back.

Tensy, once again, returns to a miserable life at the Home.

Meanwhile, in the heavenly spheres above, a parallel plot involving a series of guardian angels, including angels watching over Albie and the other children who befriend Tensy, unfolds, and we soon learn that young Tensy is indeed unique. She has no guardian angel. She is open and vulnerable to the evil mud woman, a lost soul living in the River Charon, who Albie encountered when Tensy was just a baby.

With a cast of richly-painted characters including the awful Matron Pluckrose and her sidekick Mrs Beadle, a wailing chapel ghost, some plucky kids and a team of dedicated angels on high, this is an extraordinary tale with an enormously satisfying ending--one few readers would pick.

Jen Storer's mutli-layered plot brilliantly straddles life on earth and life on high, and touches on metaphysical themes in a light but meaningful way (ideal for the readership). Her central characters are gutsy and real, the tension and dark themes are perfectly painted for this reading age group, with a fine sprinkling of spooky that doesn't resort to flagrance.

But what I love most about this book, beyond the engaging storyline and whimsical characters, is the truly fine writing voice--one of heart. The author's attention to extraordinary detail and the ability to be so visually evocative, made little gasps slip from my lips as I read. Jen Storer is a beautiful writer who plumbs the depths of our very souls to present Tensy Farlow's story.