Review: Monkey and Me 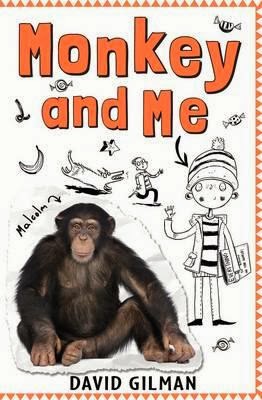 Beanie, whose real name is Jez, is the kind of kid I just wanted to hug. He's smart, funny and innocently oblivious to the impact of his leukaemia on the people around him.

His 'circumstances', as he calls them, mean that his father has quit his work as a truck driver to become a postman, while his mother works shifts at the local supermarket, so that between them there can always be someone at home just in case Beanie needs them. Which, of course, Beanie doesn't — just because he might feel sick occasionally and not always have that much energy, that's no reason to stop him from being a member of his older brother Mark's gang (probationary, until he turns ten), hanging out in abandoned warehouses, or breaking into the local haunted house!

It's on one of these adventures that Beanie first meets Malcolm. Quite what a chimpanzee is doing on its own in a deserted house in suburban England is anyone's guess, but Beanie soon befriends him and is determined to look after him. Not surprisingly, chaos ensues!

Where has Malcolm learnt to speak language? Why are two sinister men pursuing him? And can Beanie save both Malcolm and himself?

This is a wonderful story of friendship, adventure and coping with the challenges life can throw at us. In an Author's Note at the back of the book, David Gilman writes that 'we all need rescuing at times'. It's a message that resonates throughout Monkey and Me, delivered by an endearing young boy with a quirky sense of humour. A fun read, but an inspiring one too.