Your latest book The Simple Things for younger readers is so gentle and heartfelt, yet you are best known for your YA novels. Having won the Prime Minister’s Literary award for Confessions of a Liar Thief and Sex God in 2010, and been short listed in the CBCA awards for Dogs, No Worries, and A Straight Line to My Heart, what draws you back to writing for younger readers?

I think as I’ve grown older I’ve become more mellow. (It’s either that or mildew.) My first forays into YA were tough and uncompromising but by the time I got to A Straight Line to My Heart in 2011 I felt like writing something more upbeat. Life can be miserable enough without me helping it along by writing gloomy books.

I wanted to write something happy and hopeful and that’s how The Simple Things came about. I’d had the idea for several years and very slowly it took shape. To be honest, another reason for writing it was that I thought it would be a lot easier than tackling a complicated YA novel. I was wrong. I had to do a few complete rewrites of it, changing the tense and the age of the main character each time. But as it was basically a cheerful story, I didn’t mind at all.

You never shy away from difficult subjects. In Give Me Truth, your approach was hard hitting and your voice, one of a teenager struggling to cope. In Confessions of a Liar Thief and Sex God, readers will find it hard not to smile from the first chapter and yet, the topics you cover aren’t light. Now, in The Simple Things, learning to get along with grumpy relatives as well as the heartache of growing old are laid bare. What advice would you offer those trying to find a balance between covering tough topics and keeping the reader hooked?

Most of the time when I’m writing I have little idea of where I’m going or what I’m doing. It’s always a struggle for me. That’s the main thing I’d like to share with people who find writing difficult. All writers have the same problem, so please don’t give up.

As to finding a balance and something to keep readers hooked, all I can suggest is that writers keep their work honest. Don’t have your characters doing things or saying things just to be clever. Keep it real so that readers can relate and get emotionally involved with what’s happening.  One of the best pieces of advice I’ve ever been given is to ‘kill your babies’. Don’t be precious about your writing.  If it doesn’t work, hit delete.

I use lots of dialogue and I’m lucky as that comes fairly easy to me. A tip about dialogue is to say it aloud to yourself as you’re writing it. If something jars you’re bound to notice. The risk is that you’ll be thrown into a padded cell, but you get used to that after a while.

Do you prefer writing for a particular age group?  If so, why? If not, why not?

My YA novels are pitched at teens aged about 16 or 17, so I guess that’s my preferred age group for that genre. For younger readers I like the age of Stephen in The Simple Things, who’s ten.  There’s a naiveté and sweetness with most kids that age: the world is still full of wonders.  A slight problem I have is that nearly everything I’ve written is autobiographical, and I’ve run out of life to steal from.  I think now that I might have to start tapping into the next life.

While many of your better-known novels have male protagonists, you have written quite a few middle readers with girls as the main characters. Have you found pros and cons to having protagonists of different genders for different readerships? Have you ever started out with a protagonist of one gender and then switched before going to publication?

No, I’ve never switched the gender of a protagonist. Haven’t even switched my own gender. Though if I thought it would help with the story . . .

Before A Straight Line to My Heart all my YAs had male leads. The middle readers don’t really count to me because the female characters weren’t explored in depth as Tiff is in Straight Line.  I think I was intimidated by the idea of writing almost solely from the female perspective. But once I got started it wasn’t too hard. 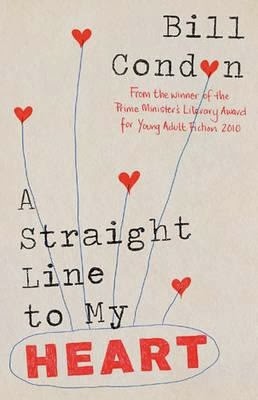 Being such a prolific writer, do you stick with one project until the first draft is complete or are you more of a dabbler, working on several things at once? Can you offer advice on how to manage multiple writing projects simultaneously?

I’m really not a prolific writer. It’s just that I’ve been around for an awful long time. It’s been nearly two years between A Straight Line and The Simple Things.

I usually battle on with one project, agonising over it, driving my wife (Di Bates) mad with moans of, ‘This is too hard! I’ll never write again!’ Etcetera . . .

I’m not good at going from project to project if they’re in different genres. For example, if I’m writing poems I find it very hard to switch immediately to prose. If I’m writing a fanciful kid’s story, it takes ages to get back into serious YA mode. So for me, it’s one thing at a time.

Do you purposely alternate between writing for different age groups and using different voices/styles? What can we look forward to next?

No, I don’t purposefully alternate what I do.  I just go with whatever idea I can find. I had no intention of writing from a female point of view, but then one night I saw a young girl in the young adult section of the library. She was alone and looked a bit lost and that made me wonder about her. I went home and started inventing her life and that eventually became A Straight Line to My Heart.

I write very slowly, so it might be a while before another book of mine is published. I write every day and though I usually end up crossing most of it out, the words gradually grow into something. I’m hoping that one day that ‘something’ becomes a new book. 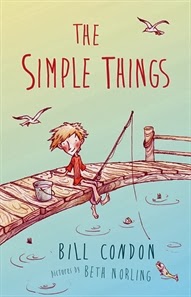 Bill Condon's latest book, The Simple Things, was published by Allen & Unwin in March 2014 and is available in all good bookstores and online for $12.99. Bill and his wife Di Bates together manage the website Enterprising Words, where they offer a range of writing, editing and manuscript assessment services.
Share this article :
Share on FB Tweet Share on G+ Submit to Digg
Newer Post Older Post Home