Review: A Breath of Frost (The Lovegrove Legacy) 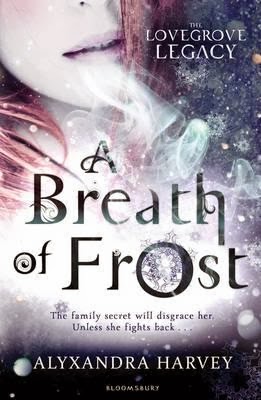 It's Regency England. Emma and her cousins Gretchen and Penelope are part of 'high society', members of the English nobility. Their world revolves around an often boring whirl of debutantes balls, eligible young men and meaningless gossip.

But there's another world they know nothing about — a world of witches and warlocks, goblins and gargoyles. And these two worlds are about to collide …

Emma, Gretchen and Penelope are Lovegroves by blood and that makes them members of one of England's oldest witch families. Their true inheritance has been kept from them as a result of a mysterious act by Emma's mother that sent her mad but which blocked her descendants from finding out about their magical abilities. That is, until Emma unwittingly unlocks the gates to the Underworld, releasing the infamous Greymalkin sisters and triggering a series of murders across London.

Now Emma has attracted the attention of the Order, who monitors the acts of all witches and warlocks, dispensing punishment where necessary. She's also caught the eye of Cormac Fairfax, a Keeper of the Order who seems to have secrets of his own. Can she trust his offers of help or do his darkly handsome looks hide a more sinister side? More importantly, can Emma and her cousins unravel their family secrets in time to close the gates to the Underworld and stop the murders?

Rich in period detail, this is a fast-paced read that sucked me in and kept me turning the pages. Combining engaging characters with a fair helping of romance and well-though-out witchcraft and mythology, it should appeal to fans of Cassandra Clare and Ruth Warburton. The second book in the trilogy, Whisper the Dead, is due for release later this year.