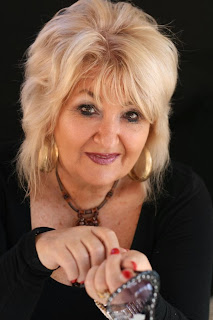 1. Tell us something hardly anyone knows about you.
My kidneys are in the wrong place. True!!! LOL. My veins also twist and curl around my arm instead of travelling in any kind of logical direction. Makes having blood taken a lot of fun for all. Obviously whoever made me was having an ‘off’ day as I’m not put together very well…

2. What is your nickname?
Kez or  The Ditzy Diva. Or just ‘Ditz’. It speaks volumes and requires no explanation.

3. What is your greatest fear?
Snakes. I have said all my life that if I lived in the country that I would have to always carry a gun with me, because if I came across a snake I’d have to shoot myself. ;-)

4. Describe your writing style in ten words.
I hope others would agree they would include: Funny, mysterious, heart-warming. Easy, laid back  - but tense where it has to be tense. Relevant. I wanted to add gripping and ‘un-put-downable’, but really? I’ve already given myself such a swelled head that I hit it on the forty-seven metre high ceiling when I went to get a drink a moment ago!

5. Tell us five positive words that describe you as a writer.
Enthusiastic. Passionate. Determined. Resilient… Is that five? Oops – Maths is not my thing…

6. What book character would you be, and why?
Can it be one of mine? Yes? Okay, I’d be Macey in Almost Dead. Why? Because she’s a survivor.  Macey has so much thrown at her, but she never gives up the fight. She’s smart, sassy and feisty.  I admire her confidence and her strength – and I love most that she doesn’t lose the essence of who she is – even when she’s at her most vulnerable.  Yes, I’d like to be Macey. And hey! It wouldn’t hurt to have her amazing wardrobe and be 17 again, either! Bring it on!

7. If you could time travel, what year would you go to and why?
Hmmnn. Aside from the whole ‘world peace thing’, there are certain years I would flit to and just make a few alterations; ease pain  - not just for myself but for others around me. But generally speaking I’m someone who looks forward; I don’t believe in looking back. (I can’t even watch rugby league because they throw the ball backwards and it goes against my life philosophy! Ha! Yes, I know. I’m in a bad way. You’re not the first person to notice.)

Therefore it would have to be a time in the future, but as that seems to be hurtling towards me with way too much speed, I think I have to be happy to stay right where I am. But, then again, if I could shave ten years off and get away with it, then maybe I should reconsider the whole going backwards thing? O.M.G I could become a rugby league fan after all! See? Life is FULL of surprises!

8. What would you say to your ten-year-old self?
You can achieve your dreams. Yes, life is hard right now, but hang in there. Have more confidence, don’t be so afraid. Be brave. It’s going to be okay. This will end, you will grow up and you’ll be in charge.  You might lose some direction in the next couple of years, but remember life is what you make it. It’s up to you. And a heads up? You WILL make it. I know – because you did it…  (And then we’d dance like wild, unfettered things and share a high five or an air punch…)

9. Who is your greatest influence?
One person? Wow… Honestly, I think this is an evolutionary thing and not a constant for me in that I feel I am influenced by many people all the time. I don’t think I can name just one, single person who has influenced me the most in my work… But I can say every time I read a book that resonates with me (and that’s often!); that makes me feel, think or act – that I am influenced by that author’s talent and skill and it makes me try harder; strive for better. Perhaps, looking back over this paragraph, I am talking about what motivates me rather than what influences me which isn’t answering the question - and which is a bit naughty  but maybe the next answer does that…

10. What/who made you start writing?
For starters, I believe with all my heart, and too many years teaching people to write, that you have to be born to write. I don’t really think you have a choice. It’s like a fire inside you that just keeps tickling away, never really giving you any peace. However, while I also accept that for many that fire is ignited later in life, I wasn’t one of those. I had only ever really wanted to write. Or teach. My first publication was at nine years old  - a poem in the Sun Herald’s kids section. And while I’m proud of that, these days I do try to gloss over the fact that I’m pretty sure it was a blatant plagiarism of Wordsworth’s Daffodils!  The editor must have had a hole to fill that day and plucked mine off the top of the pile! Still, I basked as one would…

In fairness though, this fire had to be fed, and for that I thank my mother who loved books and raised me in an environment filled with wonderful words and worlds. I did have to wait to be much older to experience commercial fiction though – I was only allowed to read the classics as child. Still, it was a wonderful grounding and it certainly fed that fire.  Thanks Mum!

11. What is your favourite word and why?
This is a silly meaningless answer – but the only thing that came immediately to mind and one my family would instantly associate with me is a number: 47 and all its extensions. 47, 47,000 47,000,000 – as in ‘I had to do it forty seven times!’ Or ‘I’ve told you 47,000 times not to do that!’  I’m not sure what says about me.  It has no relevance to me as a writer or my work, except that occasionally a character will say it and of course, I shriek with horror and quickly delete it! Truth is though, I’m big on all superlatives. If there’s way to make it bigger, better and or fabulous – then I’ll find those words. Which translated means that I probably will never make a good eye-witness.

Officer: Can you describe the assailant?
Me: O.M.G, he was at least forty seven metres tall and … You get the picture.  (Well, you would if I ever just stuck to the facts.)

12. If you could only read one book for the rest of your life, what would it be?
Hmmnn. Agonising… Agonising… You know? I think it has to be Louisa May Alcott’s Little Women. It’s a sentimental choice. It’s a book I remember clearly from childhood because mum and I read it together many times. But there was more; aspects of that book and story carried over into our relationship. I was at boarding school and had to write home every week and fell into calling mum ‘Marmey’, emulating the drawling March girls. (Mum read with accents).  Later when Mum became a grandmother she chose to be called ‘Marm’ – again as a tribute to Little Women and what it had meant to us.

But other than that? So many books! Right now though, a close second would have to be Almost Dead because I am enjoying such a love affair with this new book baby.   Sometimes you write a book that just captures your heart – and this one has done that to me. I’m proud of it – and so yeah – that would definitely be a very close second choice. 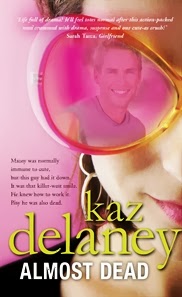 Kaz Delaney is an Australian author of more than 65 titles for children and teens. Her YA novel Dead, Actually (KBR review here) won Favourite Paranormal at the Australian Romance Reader's Association Awards and won an Aurealis Award for Best Young Adult Novel in 2012. Her latest novel, Almost Dead, is a companion book to Dead, Actually and was published by Allen & Unwin in January 2014. Visit Kaz Delaney's website to find out more about her books and writing tips or check out her Facebook page for more information.